There are few pies in which online giant Amazon does not yet have its fingers. However, in 2018 it is possibly looking to grow further by becoming an online pharmacy .

Amazon was started by Jeff Bezos in 1994. The company was initially founded as Cadabra, Inc. but changed its name to Amazon.com, Inc. after just a few months. Amazon.com's ecommerce store went live in 1995. It began life exclusively selling books online, but now has a portfolio including almost every product available - from food to furniture.

Today Amazon is one of the largest companies in the world. The Seattle-based company has hundreds of locations all over the globe, and is a leading innovator in technology, with projects such as its AI home assistant Alexa and drone delivery program Prime Air . Amazon has revenue of $135,987 million, placing it at #12 on the Fortune 500 .

During its rapid expansion, Amazon has moved into almost every market there is. Most recently this has involved making roads into the retail convenience space with its Amazon Go! stores, and now it may have its sights set on online pharmacies.

The online pharmacy industry is one which has grown rapidly over the last few years. One of the biggest companies in that market, CVS Health , has revenues of $177,526 and sits at #7 on the Fortune 500 . After a mid-90s slump, CVS revenue has grown inexorably since it acquired Soma.com, and fully integrated its online and brick-and-mortar pharmacy lines, clearly demonstrating the public's desire for online pharmaceutical services. 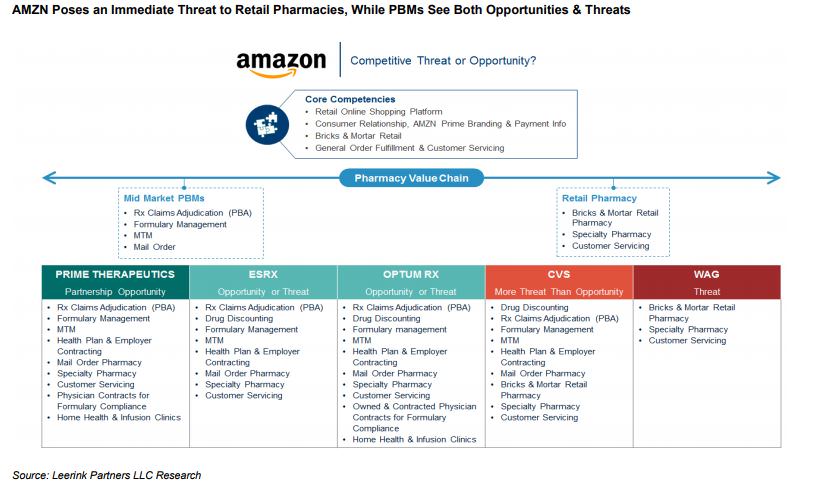 And, just half a year after opening, Pharmacy2u.co.uk - the UK's National Health Service (NHS) approved online-only pharmacy - has reported 100% growth , and has secured a further PS7 million worth of investment to maintain its momentum.

The reasons for the market's success are clear. People who have long-term illness or disability will often find it difficult to leave their homes to collect prescriptions from the pharmacy. Some people will get friends and family to collect them on their behalf, but patients value their independence, and like to be able to acquire their medicines for themselves. Online pharmacies provide them with this ability.

It's easy to see why Amazon has been considering roads into the industry. "The UK pharmacy market is worth £12 billion a year alone, and is growing by around 2%. Those are numbers Amazon will be eyeing enviously," said industry expert, David Jinks .

Before fully stepping into the prescription medicine market, Amazon already has some experience in the field. The online retailer already sells medical equipment and supplies, as well as non-prescription drugs and other related goods. In Japan, Amazon also sells medicine which cannot be obtained without a previous consultation with a pharmacist - known as category 1 drugs.

Amazon has stopped short of confirming its intentions to move into the prescription drugs market, but its actions are heavily suggesting they are testing the waters for such a move. The company hired Mark Lyons , formerly of Premera Blue Cross , in 2017. Lyons' reported job is to be an internal Pharmacy Benefits Manager, a role which is traditionally responsible for administering the prescription drugs benefits of a company health plan.

And a recent Amazon job posting adds more evidence - "The HIPAA Compliance Lead is an experienced HIPAA professional who will own and operate the security and compliance elements of a new initiative. You will work alongside product managers, software developers, bizdev, and legal teams to ensure that our services are in compliance with HIPAA security and privacy requirements."

HIPAA stands for the Health Insurance Portability and Accountability Act which was passed by the US Congress in 1996.

The online pharmacy market would clearly be a great fit for Amazon, and it certainly looks like the ecommerce giant is getting ready to make its move. The company has yet to commit to the endeavor officially, but it seems likely an announcement is just over the horizon.

With little from Amazon themselves, the final word goes to Diana Graalum, PharmD, BCPS, clinical pharmacy manager at MedSavvy, an Oregon-based company that offers an online tool to compare medications by cost and effectiveness.

"Someday we might have a situation where your doctor prescribes a medication, and a drone flies up to your house and drops it off as you arrive home."

That scenario, indeed, seems to have Amazon's name written all over it.

You can hear Amazon's General Manager of Softlines, Andrew Turner, speak at eTail Canada 2018 in May, at the Hyatt Regency, Toronto, ON.