In 2016, Facebook took on Craigslist with its new marketplace feature. Now the social media giant has its sights set on the property market.

Facebook began life in 2004 when Harvard students Mark Zuckerberg, Eduardo Saverin, Andrew McCollum, Dustin Moskovitz, and Chris Hughes, wanted to create a web portal which would allow their classmates to communicate and connect with one another. Initially only made available to Harvard students, the service was eventually rolled out to other educational institutions, before being opened to the public in 2006.

Today, Facebook has over two billion users and is one of the biggest companies in the world. Its origin has been the subject of an Oscar-winning film, and the company enjoys revenues of $27,638 million, placing it at #98 on the Fortune 500.

Facebook has stayed at the top of its game by constantly innovating and adopting features from other services. When Timehop became popular by allowing people to see historical social media posts, Facebook added the " on this day " feature. When WhatsApp allowed users to use WiFi as opposed to mobile signal to text one another, Facebook purchased the company, and expanded its own messaging function in sympathy.

And, when Facebook noticed the popularity of peer-to-peer selling sites such as Craigslist and Gumtree - not to mention items being bought and sold within Facebook groups - it decided to create its own marketplace feature. "Click on the [marketplace] tab and you'll be able to see an inventory of items for sale that Facebook thinks you'll be interested in. If you're buying and selling through the groups, the app will probably have a better idea of what you like. If not, results will become more relevant the more you use Marketplace," said Vivek Sharma, Director of Product Management at Facebook Marketplace. 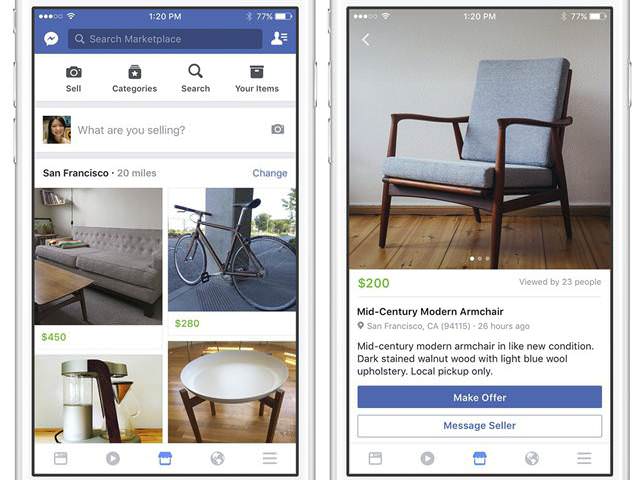 While the initial response to the Facebook Marketplace has been lukewarm, Facebook isn't giving up on the service yet. Looking for inspiration from services such as Zillow, Facebook is now expanding its marketplace to include property listings.

All Things to All People

For a while, real estate agents have concluded they are significantly more likely to sell or rent a property if they advertise it on social media. However, up until now, Facebook has avoided creating features which cater specifically to this market.

With the new update, users can search specifically for property listings within the Facebook marketplace, and make use of the new property-focused filter options. Listings can now be filtered by location, price, number of bedrooms, square-footage, acceptance of pets, and more, giving Facebook users far more control over their search results.

On top of this expanded functionality, Facebook is also partnering its property marketplace with established rental companies, Zumper and Apartment List. These two prominent rental platforms, each receiving millions of visitors per month, will now be automatically synchronizing their property portfolios with Facebook's marketplace.

"Facebook's deeper move into real estate - both in rentals and for sale listings - represents a strategic threat to a range of existing businesses," said PropTech expert Mike Delprete. "For real estate portals in particular, the first battleground is agent premium spend. Facebook is giving agents a new, powerful choice of where to spend their money for leads. This situation poses quite a dilemma for real estate portals - Do they cooperate with Facebook [such as Zumper and Apartment List have done], or do they work to stifle Facebook's momentum at all costs?"

Facebook clearly has a desire to be all things to all people. The social media giant seems to view any time spent by web users on other websites or apps as time which could be spent on Facebook instead, and is looking to tear down as many barriers to its users staying on their website as possible.

Property rentals are the latest way Facebook has achieved this, but it almost certainly won't be the last. Property sales would be the next logical step. What's certain is that Facebook isn't going anywhere anytime soon, as is likely to remain a major player in the ecommerce world for many years to come.

"Marketplace is a popular place for people to look for a home to rent. Now that we're adding listings from Apartment List and Zumper, people can search even more options in the U.S. to find a place to call home. First with vehicles and now with housing rentals, we're partnering with businesses to bring more ease and convenience for consumers."

You can hear Facebook Canada's Head of Retail, Sam Galanis, speak at eTail Canada 2018 in May, at the Hyatt Regency, Toronto, ON.